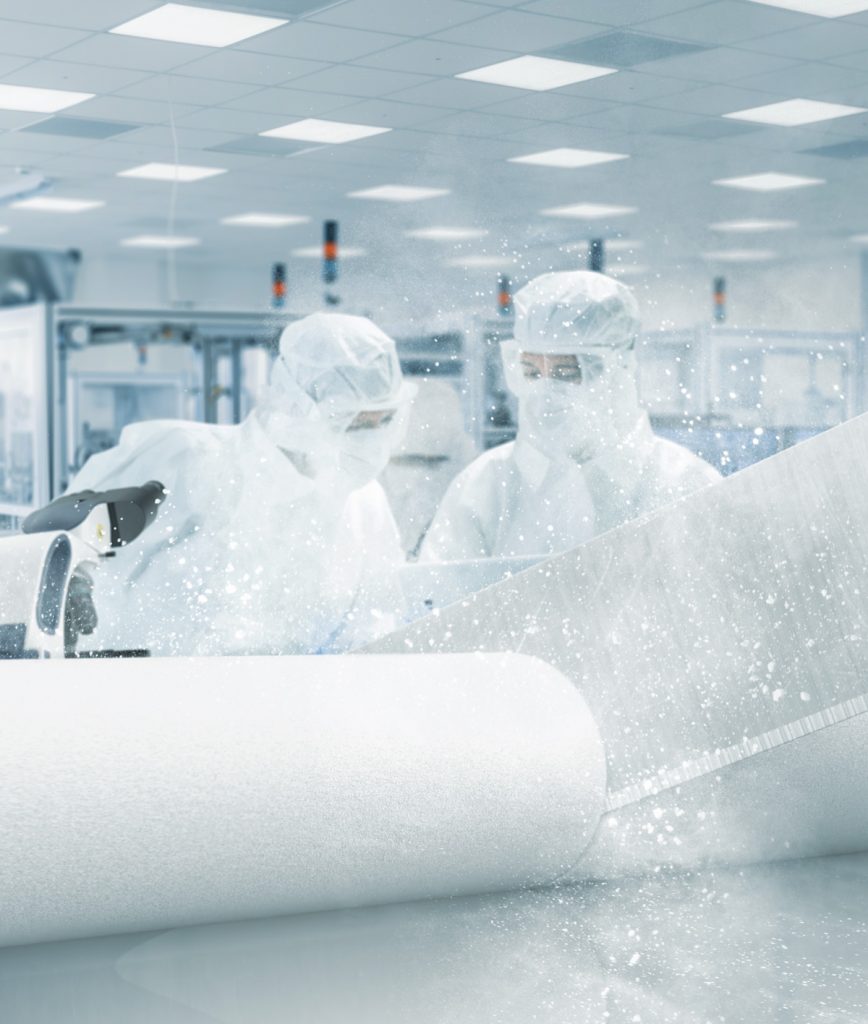 For more information please contact:
t-fitsales@zotefoams.com
While standards and specifications abound when it comes to the design features, apparel and operator protocols necessary to minimise particulates as a contaminant in cleanrooms, there is little or no formal consideration of the part played by materials such as those used for insulation. Here, Mike Rust, Global Development Manager – T-FIT® Insulation at Zotefoams plc, considers the issues and describes a test protocol developed to measure the particulate contribution of three different types of insulation during typical cutting and fitting operations within a cleanroom.

Wherever cleanroom manufacturing happens, be it for pharmaceuticals, biotechnology or semiconductors, the environment must be designed to ensure the safety and quality of products. Cleanroom design minimises the introduction and circulation of potential contaminants, with control of particulate emissions essential to maintaining a secure, clean environment.

The construction of the cleanroom shell — the walls, floors and ceilings — is subject to exacting engineering standards and specifications to maintain air quality in terms of particulate release. In 2016, ISO 14644, the recognised standard for cleanrooms, was expanded specifically to include the “assessment of suitability for use of equipment by airborne particle concentration” — although it did not extend to such important matters as the selection, testing or ease of cleaning of selected materials.

Amid all the attention paid to preventing, monitoring, and controlling particulates, one important aspect is often overlooked: the impact on particulate levels of the thermal insulation that controls the surface temperatures of process pipework and HVAC equipment in and around cleanrooms while conserving energy and providing personal protection for operators.

Whatever type of insulation is selected, during installation it will have to be cut to size and very likely manipulated to fit complex pipework runs in tightly confined spaces — all happening in situ. Post-installation, thermal insulation is not simply ‘fit and forget’: it is typically checked regularly as it is removed to facilitate pipeline maintenance and repair. And it is during removal that traditional thermal insulation products can pose the most danger in terms of emitting potentially hazardous particulates into the cleanroom environment.

So far as we can ascertain, there are no recognised independent tests that compare the particulate-emission performance of different insulation materials commonly used in a cleanroom — a situation that is no help to those charged with specifying appropriate insulation solutions.

With all the above in mind, Zotefoams therefore commissioned Occhnet, a leading occupational hygiene consultancy based in the UK, to design and conduct an independent test of T-FIT Clean foam insulation, produced from Zotefoams’ ZOTEK® F high-performance PVDF closed cell foam. T-FIT Clean’s performance was tested against two traditional insulation products, manufactured respectively from foil-backed stone wool and flexible open cell melamine with a PVC jacket. The testing measured the indicative concentrations of particulates released into the air during cutting of the material.

The testing replicated the worst-case scenario — that of operators slicing and/or cutting the insulation within the cleanroom —simulating cutting-to-size operations during installation and replacement maintenance. 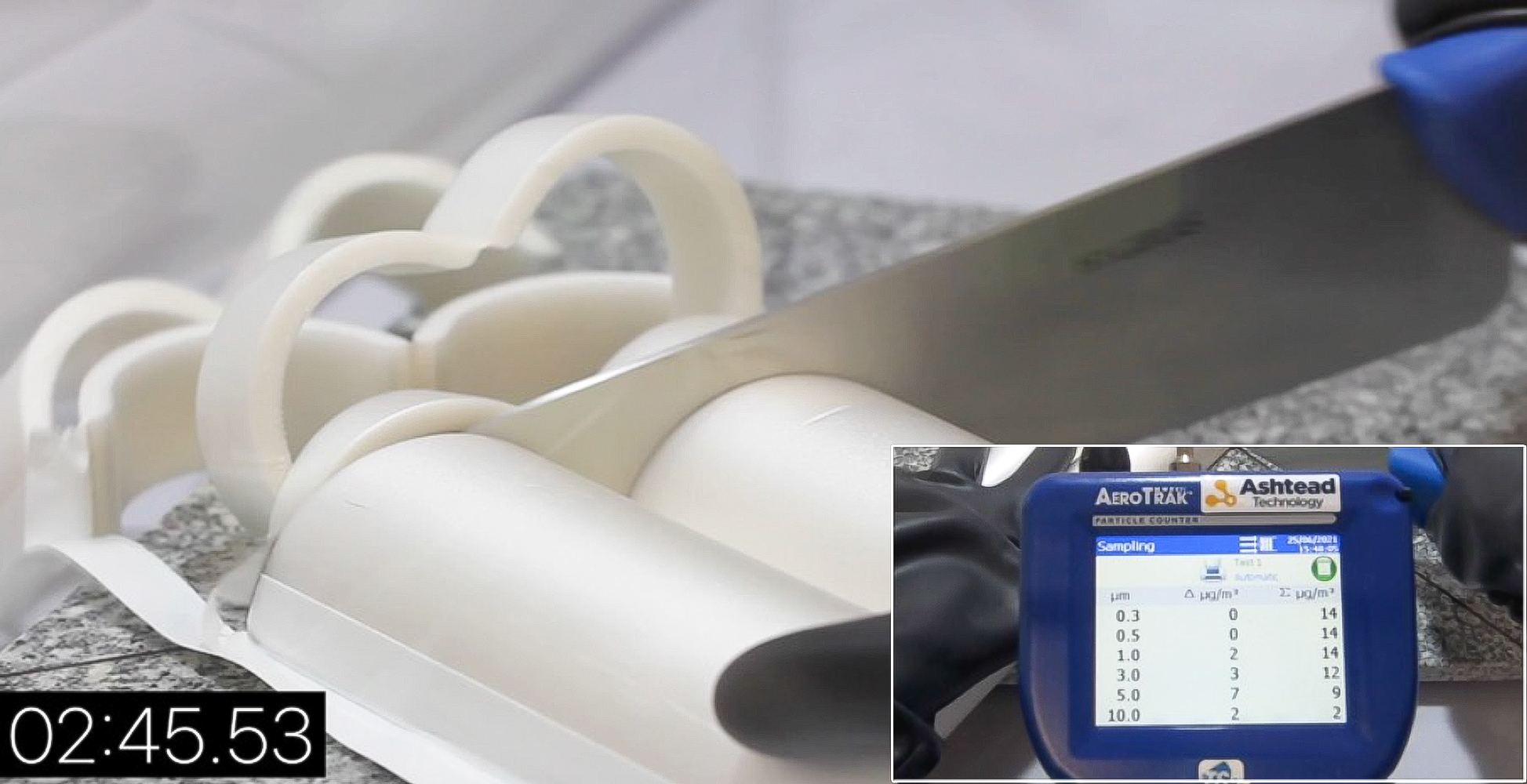 Each sample insulation material was placed into a sealed glovebox (see Figure 1 above) containing a particle counter. This ensured that, once the test samples and testing equipment were inside, no further particulate could be introduced. The glovebox did not contain an air exchange or filtering system.

Measurement and comparison between the three materials produced results worthy of consideration by those charged with cleanroom design and operation.

T-FIT Clean: As Figure 2 below shows, the particle count fell steadily through the first two minutes of the static period. During cutting and manipulation and also in the final two-minute static period there is a continued gradual decrease in particle count, indicating that T-FIT Clean does not emit particles within the measured particle size (0.3 to 10 micron). Occhnet concluded that “there was no detectable release of particulate during the cutting period.” 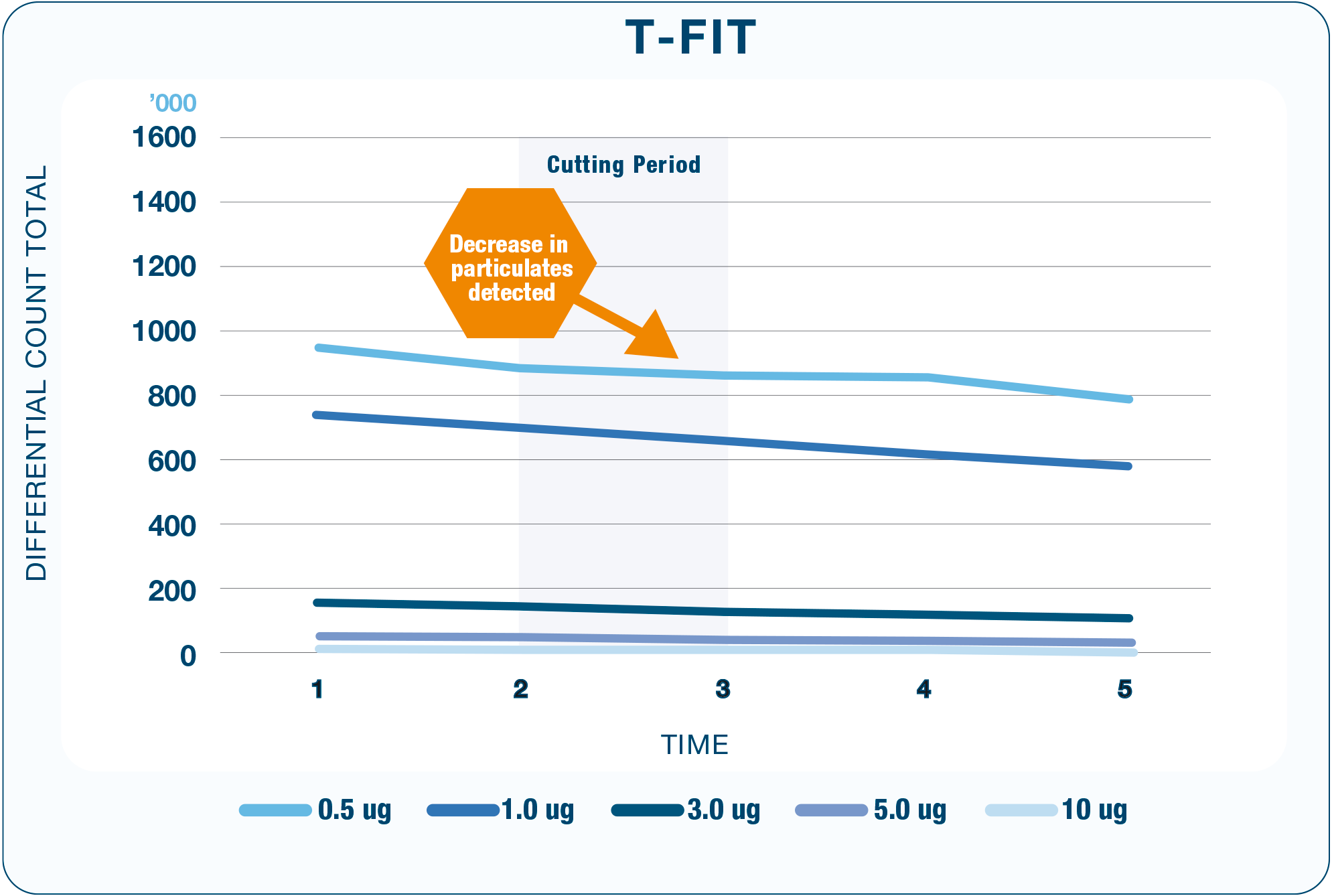 Flexible open cell melamine: When this typical melamine product, often installed in cleanrooms, was cut and manipulated, there was a significant increase in background particulates, indicating the materials added large amounts of particulates into the environment even before it is cut (see Figure 3 below where the particulate count starts at 2 million). Occhnet observed that a clean cut was difficult to achieve without compressing the material, which released air from the open-cell construction, and that this coincided with the rise in particulate count. 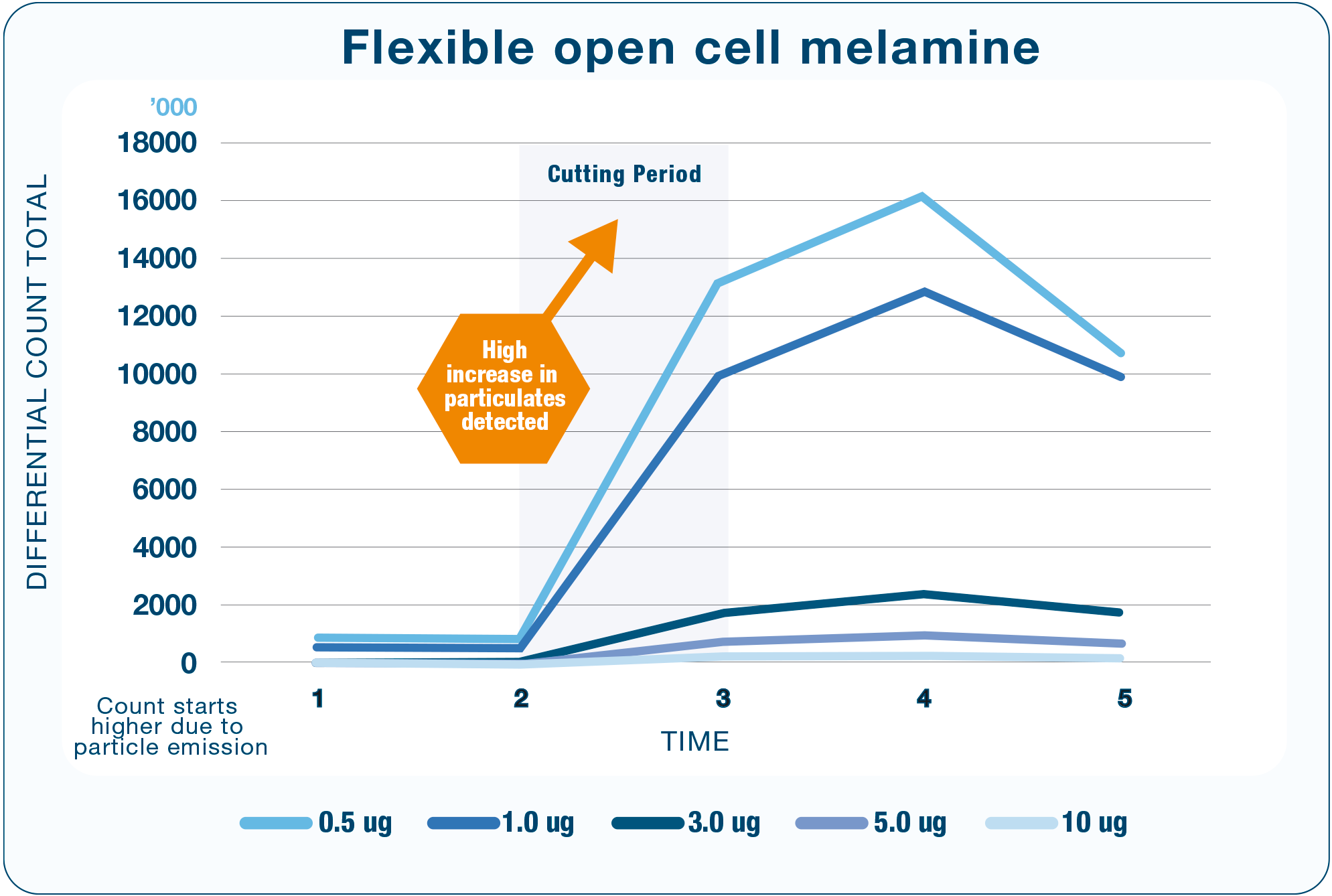 Foil-backed stone wool material: The particle count was stable during the static period but as soon as cutting commenced the particle count rose significantly, and particularly for larger particles (Figure 4 below). According to Occhnet, while a clean cut was possible without compressing the sample, “the material appeared friable and the rise in count was indicated to be associated with the cutting of the material.” 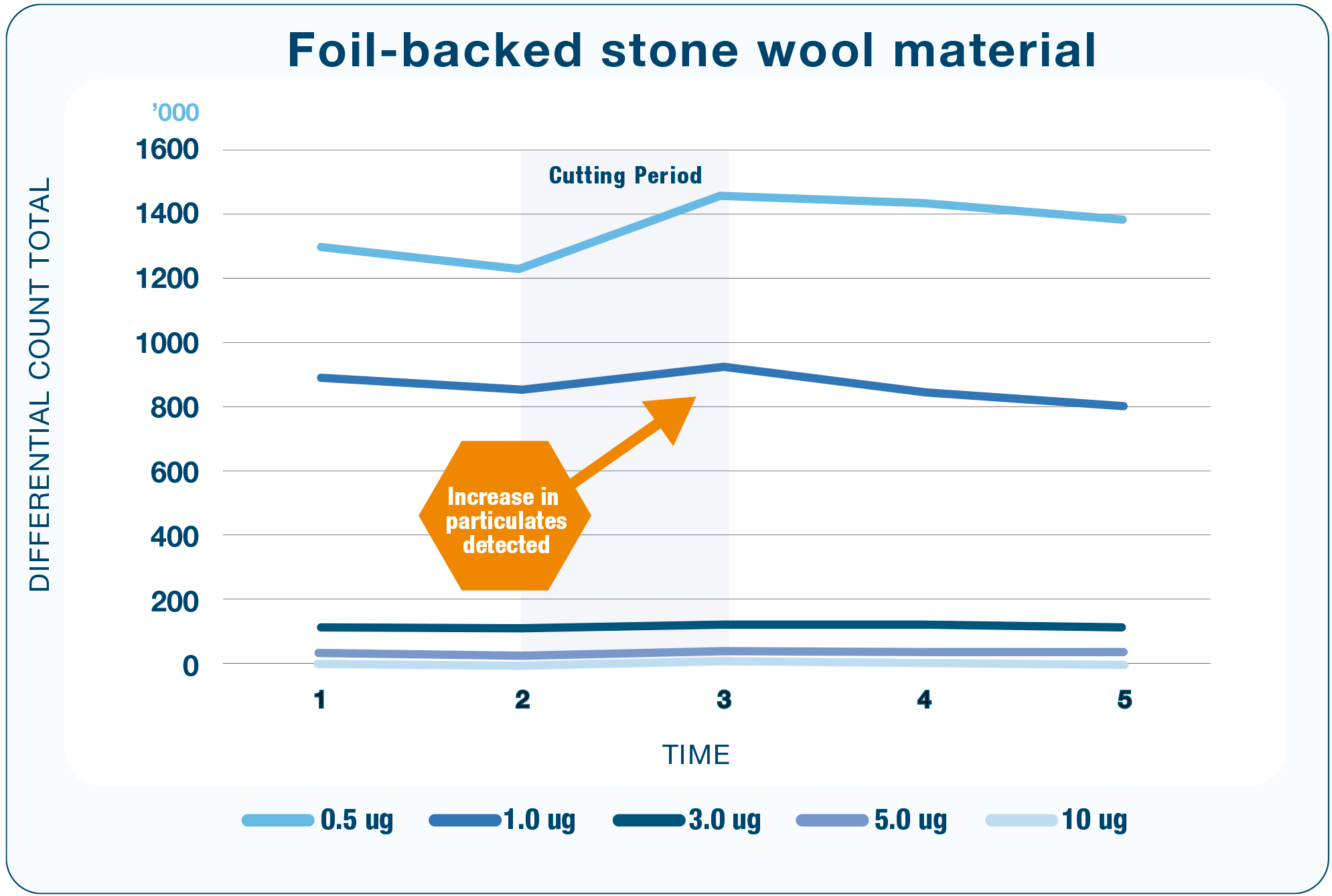 It should be noted that this material incorporates a glue binding the fibres together, which is likely to deteriorate when the material is used in high-temperature applications, raising the prospect of particulate emissions increasing over time.

A unique manufacturing process
— Why T-FIT outperforms the competition

In Stage 1, pure PVDF polymer is extruded into a solid slab, then irradiated to create chemical bonds that join the polymer chains (crosslinking). This results in excellent thermal stability, high strength and toughness compared to non-crosslinked materials, and crosslinking via irradiation also prevents the shrinkage that is often associated with thermoplastic materials. Stage 2 applies extremely high pressures and temperatures to dissolve the nitrogen gas into the slabs. In Stage 3, the nitrogen-saturated slabs are put through a second, high-temperature, lower-pressure cycle where the pressure is gradually released to allow the free expansion of the material into sheets of foam.

The result is a fine, completely closed cell structure that demonstrates exceptional performance across the board, not just in limiting particulate emissions but on all measures of cleanroom insulation efficiency. T-FIT Clean is also highly resistant to bacteria and mould growth and its ASTM G21-tested performance on zero fungal growth brings long-term protection against the risk of product contamination. Compared to open cell materials, T-FIT more effectively limits moisture and gas penetration because there is no continuous network through which substances can travel.

A wide temperature operating range — from -80°C to +160°C — combined with the durability of the material ensures thermal performance remains unimpaired in the long term, even where repeated cycling between chilled process temperatures and high cleaning temperatures (clean in place, sterilise in place) is involved.